What Is the EEOC?

› Labor & Employment › What Is the EEOC?

The United States Equal Employment Opportunity Commission (EEOC) is a federal agency created by Congress through Title VII of the Civil Rights Act of 1964, which was signed into law by President Lyndon Johnson.

The EEOC has the responsibility to enforce Title VII prohibitions against discrimination in employment based on race, color, religion, sex, and national origin. The EEOC’s responsibility in this area covers a broad range of employment actions.

II. Highlights of Events That Lead to the Creation of the EEOC

Before the EEOC was created, discrimination in employment became a national concern during World War II. In 1941, President Roosevelt signed Executive Order 8802 to prohibit government contractors from engaging in employment discrimination based on race, color or national origin. This Executive Order applied to all defense contractors, but contained no enforcement authority. Its purpose was to ensure that no strikes or demonstrations disrupted the manufacture of military supplies needed for war. 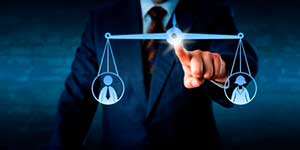 In 1961, President Kennedy signed another executive order on the same issue. Executive Order 10925 prohibited government contractors from employment discrimination on based on race. It required contractors to “take affirmative action to ensure that applicants are employed and that employees are treated during employment without regard to their race, creed, color, or national origin.” It established the President’s Committee on Equal Employment Opportunity, a forerunner to the EEOC. The new Committee was initially chaired by then Vice President Lyndon Johnson. The Executive Order vested the Committee with authority to impose sanctions on contractors for violations of the Executive Order.

III. Overview of the EEOC

The EEOC is managed by a five-member bi-partisan commission. No more than three commissioners can be from the same political party. Each commissioner is appointed to a five-year term by the President with the advice and consent by the Senate.

The EEOC’s primary responsibilities are enforcing federal laws prohibiting employment discrimination on the basis of race, color, religion, sex (including pregnancy, gender identity, and sexual orientation), national origin, age (40 or older), disability, or genetic information. This also includes harassment by managers, co-workers, or others in the workplace, based on those grounds, denial of a reasonable workplace accommodation that the employee needs because of religious beliefs or disability, and retaliation because the employee complained about job discrimination, or assisted with a job discrimination investigation or lawsuit.

The EEOC also is responsible for:

IV. How the EEOC Carries Out Its Enforcement Responsibilities

Not all employers are subject to the EEOC’s enforcement authority. To be subject to EEOC authority, an employer must have a certain minimum number of employees to be covered by the laws they enforce. This number varies depending on the whether the employer is a private company, a state or local government agency, a federal agency, or other entity, and the kind of discrimination alleged. For details and requirements on whether an employer is subject to EEOC authority coverage, the EEOC provides a comprehensive guide.

The EEOC has the authority to investigate charges of discrimination against employers who are covered by the law. Its role in an investigation is to fairly and accurately assess the allegations in the charge and then make a finding. If the Commission finds that discrimination has occurred, it will try to resolve the charge through conciliation or other informal mediation procedures. If those measures are unsuccessful, the EEOC may file a lawsuit to protect the rights of individuals and the interests of the public. When deciding to file a lawsuit, the EEOC considers several factors such as the strength of the evidence, the issues in the case, and the wider impact the lawsuit could have on the EEOC’s efforts to combat workplace discrimination.

As part of its enforcement and administrative authority over employment discrimination, the EEOC issues regulations implementing the employment discrimination laws enacted into law by Congress. Like other federal agency rulemaking, the EEOC publishes proposed rules and provides an opportunity for the public to comment on them. Once the Commission considers the comments, the commissioners vote on whether to adopt the rule as final. Covered employers will have to comply with the rules.

The EEOC offers a number of resources to employers to help them comply with the EEO laws. The EEOC publishes helpful guidance for employers to help them comply with the various laws applicable to them. Guidance documents express official agency policy and are used to explain how the laws and regulations apply to specific workplace situations. Much of the guidance is based on public input from experts, hearings, witness testimony and empirical information. It also provides resource documents to help the public understand EEOC policies and positions on a wide variety of topics related to employment discrimination.

If you would like to know more about the scope of the EEOC’s authority, or if you are unsure whether your business must comply with any of the EEOC’s regulations, you should consult employment compliance counsel with experience in this area of law.