Overview of the Americans with Disabilities Act (ADA) 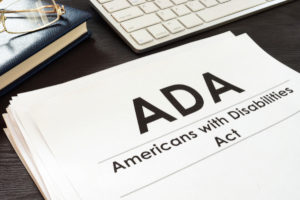 The ADA also imposes certain obligations on public facilities. Specifically, title III of the ADA requires that the owner, lessor, or operator of a “place of public accommodation” must remove any “access barriers” that would hinder a disabled person’s access. That provision requires government agencies and private sector businesses that employ 15 or more people) to provide accessible facilities such as wheelchair ramps and entry doors, handicap parking spaces, braille signage, and so forth.

Does the ADA Apply to Internet Accessibility?

The question of whether the ADA applies to internet access arose well after the ADA’s enactment. As mentioned above, the ADA was enacted into law before the advent of the internet. However, subsequent amendments to the ADA failed to address internet accessibility.

The question of ADA applicability to internet access has been left largely to the courts to sort out. The courts have not been consistent in answering the question. Some courts have ruled that commercial websites are places of public accommodation and thus subject to ADA accessibility rules. Other courts have ruled the other way, concluding that the ADA does not offer any protections whatsoever for online users.

In one case, the court concluded that the ADA and its implementing regulations apply to websites only if there is a close “nexus” between the site and a physical location. In this well-known case, the website of the Winn-Dixie supermarket chain was not accessible to users with poor vision. The court ruled that the ADA requires Winn-Dixie to make their website accessible to users with poor eyesight. This case has led to an explosion of lawsuits against companies with non-ADA compliant websites.

This disparity between the court rulings makes it difficult to know with certainty whether any commercial website is subject to the ADA accessibility laws and regulations. Nonetheless, the growth of the internet and widespread dependence on it means websites will need to come into compliance with the ADA as a practical, if not legal matter.

Growth of the Internet and Recent Federal Regulations

The longstanding view of the Department of Justice (DOJ) is that the ADA does apply to commercial websites. DOJ views its position as consistent with the ADA’s title III requirement that the goods, services, privileges, or activities provided by places of public accommodation be as accessible to people with disabilities as they are to people with no disabilities. 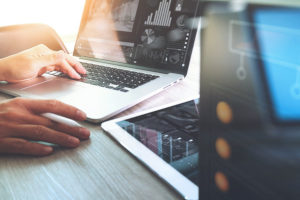 Without clear guidance in the form of laws or regulations, covered entities should do their best to comply with the Website Content Accessibility Guidelines 2.1 (WCAG). Compliance to the extent practicable with the WCAG will likely cause a court to find your website complies with the ADA.
Here are a few WCAG recommended modifications your company can make to its website that are relatively easy and inexpensive:

1. Use easily resizable text with a high contrast mode option to make text easier to read for sight impaired customers.

2. Include text descriptions of photos. Two commonly used technologies to assist people with poor vision are screen readers and refreshable Braille displays. A screen reader is a computer program that speaks the text that appears on the computer display, beginning in the top-left corner. A refreshable Braille display is an electronic device that translates text into Braille characters that can be read by touch. These assistive technologies read text. They cannot translate images into speech or Braille.

3. Include audio descriptions and transcripts with videos and social marketing strategies. They help people who are hard of hearing.

4. Include a text only option. Documents should be accessible in an alternative text-based format, such as HTML or RTF (Rich Text Format), in addition to PDF because text-based formats are the most compatible with assistive technologies.

5. Make all functionality accessible through a keyboard for visitors with mobility issues.

If your business is a hotel owner or manager, it probably has a hotel website, mobile booking app, virtual concierge, and perhaps a reward program that loyalty club members can access through a social site. All of these web components should be audited and adjusted to meet compliance guidelines.

7. Ensure that your in-house website development team members are trained in ADA accessibility for websites.

Consult with the Attorneys at KPPB LAW for more information.

An ADA compliant website can protect your company from lawsuits and expensive monetary awards for non-compliance. Consult with an experienced attorney at KPPB LAW to find out whether your company’s website is compliant and what steps if any you should take to remedy any non-compliance.